How this engineering company supercharged their R&D process with SEM

As device dimensions are shrinking, engineers and researchers are required to work on nanoscale levels. As a result, new technology is needed to create and evaluate structures during the R&D process. Luckily in turn, the physical size of this technology is getting smaller too.

Take SEM for example. Because SEM equipment is large and expensive, researchers and operators depend on an external or central lab to perform their analysis. With the arrival of desktop SEM, that complexity will become obsolete. A desktop SEM — also referred to as a compact or benchtop SEM — is a smaller, more handy version of the traditional floor model SEM. It is SEM equipment that you can place on your desk, with great flexibility as a result.

Dr. Tommaso Baldacchini, senior scientist at Newport Corporation, talks about the inconvenience that existed before desktop SEM: “In the past, researchers would use large field emission SEMs. If you were part of a department that provided access to the SEM equipment, you were lucky. But researchers were usually confronted with multi-facility type of centers, where you have to reserve time to use the SEM equipment. Often, technicians were also required to assist you, which is very time-consuming. Desktop SEM has put an end to this dynamic.”

How can desktop SEM optimize the R&D process?

Because of its simplified user interface, the sample loading and speed, a desktop SEM is also easier to use than a regular SEM. In fact, a desktop SEM is so manageable that even researchers with none or very basic lab skills can operate it. For a researcher who is involved in R&D processes, this brings great freedom. Desktop SEM provides you with easier analysis of your materials — and allows you to perform iterations much quicker.

As a result, your R&D process becomes much more efficient. Which in turn results in a highly effective production process, because your company’s lead time and time-to-market become shorter. The commercial gains for your organisation are easily quantifiable; something upper management will appreciate.

Dr. Baldacchini elaborates further on the practical applications of desktop SEM: “Newport uses femtosecond lasers or lasers in HPALS to perform both additive and subtractive machining, creating structures with features on the scale of 100 nm. Desktop SEM is highly suitable to characterize not only the size or the feature, but even the topology of the products we create. The Phenom Pro desktop SEM is a very versatile tool for characterizing micro- nanostructures produced by laser derived writing.”

Learn more about how the Phenom desktop SEM is a great time-saver for Dr. Baldacchini — and how it increased the efficiency of Newport’s R&D process significantly. Read the free Newport Corporation case study now: 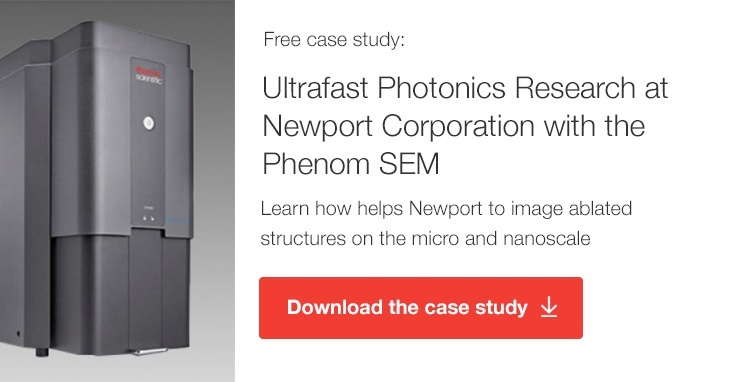 Battery research with a Scanning Electron Microscope: inspecting one layer at a time What is depth of field and how can I optimize it in a scanning electron microscope? How a desktop SEM saves lab operators a lot of time Expert sample preparation techniques for SEM