Resistance to fire, sound absorption, tensile strength and low price caused a boost in asbestos mining activities at the beginning of 19th century.

The material properties, particularly its lightness and resilience, started a real revolution in the construction engineering and asbestos-cements factories, which immediately emerged all over the world.

Ironically, in the second half of 20th century, the material that was considered eternal due to its long-lasting characteristic, would see a premature end to its success. Some researches made a connection between the release of asbestos fibers and lung cancer, mesothelioma and a chronic inflammatory disease (which would later be called Asbestosis).

When public attention was drawn to the danger involved with the use of asbestos, these materials were banned in several countries because wind erosion, fires, building collapses and material ageing would release these fibers into the air.

But it was already too late: asbestos was everywhere. It was estimated that in 1973, the consumption of asbestos for all kind of applications in the US amounted to 804,000 tons. In 2003, 17 countries had officially banned the material. To date, 1% of asbestos is still allowed in the production of certain items in the US.

Figure 1: This chart shows the trend for asbestos extraction worldwide. Today, it is still extracted in some countries, exposing the workers to serious health threats.

Many factories continued producing this material asbestos for quite long and the exposure to asbestos fibers had devastating consequences for the people working on the production line. In some countries, this material is still extensively produced and used, especially for roof coating.

Asbestos exists in the six different forms listed in table below: all of them are carcinogenic and represent a very serious threat to human health.

Figure 2: Asbestos exists in the six different forms listed in the table.

The chrysotile and the amphibole group (including the crocidolite and the anthophyllite) are the most diffused and are found not only in construction material, but also in several fabrics and adhesive materials.

How SEM is crucial in asbestos detection

Governments from all over the world are working intensely on detecting, identifying and reclaiming all the asbestos-containing tiles. However, detection of asbestos fiber is not very easy and complex analyses must be performed in order to identify contaminated sites.

If the presence of asbestos is suspected, a specialized operator with appropriate protection gear will collect samples (airborne or solid, depending on the case) from the potentially hazardous area and analyze them using a scanning electron microscope.

Samples can be collected by contact or by using specially designed pumps that must be in operation for some hours to represent an appropriate reference.

The air is forced through a gold foil with small holes that acts like a filter and collects particles and fibers using electrostatic interactions.

A small portion of the used filter is then analyzed to search for asbestos fibers as thin as 3 μm and as short as 5 μm (for scale, an average human hair has a diameter of 70 μm).

The operator will therefore closely observe the images and perform an energy-dispersive X-ray microanalysis (EDX) to get the chemical composition of the suspect fibers. The presence of sodium, calcium, magnesium and iron, in combination with silicon and in specific ratios, will trigger the alarm.

Figure 3: An example of the images that are processed during asbestos analysis. The background material is a thin gold foil with holes to let air pass through. All particles and fibers are collected by the filter and remain in place due to electrostatic interactions.

When the analysis is over, the overall asbestos content is evaluated and compared to standard values defined by norms (which are slightly different from country to country). If the asbestos concentration is over a certain value, it is necessary to intervene with highly specialized removal procedures.

The recovery procedures are highly expensive and time consuming, to the extent that many people do not declare the possible presence of this toxic material, probably unaware of the risks they are exposed to.

When traces of asbestos are detected, two possible solutions can be adopted:

Learn more about how asbestos can be effectively detected and identified with the help of a scanning electron microscope (SEM) by downloading the RPS case study. In this case study, RPS — a Dutch company specialized in rapid risk assessments and on-site measurement checks — explains how they use SEM to improve and accelerate risk assessment.

Get the free case study here: 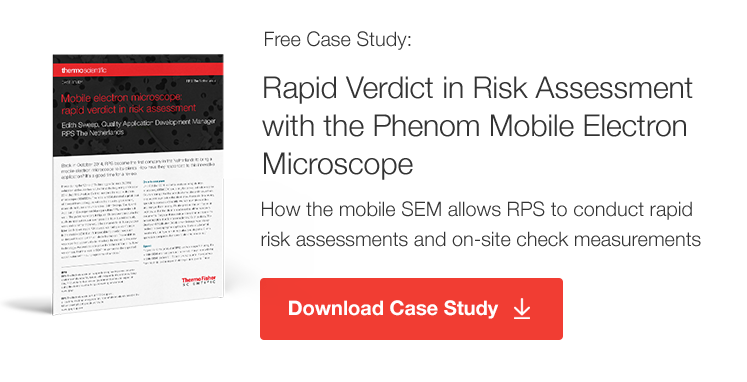 Luigi Raspolini is an application engineer for the Thermo Scientific Phenom Desktop SEM product range at Thermo Fisher Scientific. Luigi is constantly looking for new approaches to materials characterization, surface roughness measurements, and composition analysis. He is passionate about improving user experiences and demonstrating the best way to image every kind of sample.